John of God’s in Abadiania

Walkway to my Room at Lindo Horizonte

May 10th, 2011 – Walked about a mile in the morning to the Rodoviario, and caught an earlier bus than the one I was ticketed for.  Seated next to Oliver, a bright, young videographer from the U.S., I listened intently as he explained how he had been hired to work for an NGO in Brazil, only to discover the real purpose of the NGO was to extract money from the government, not provide humanitarian assistance as it purported. He was quite disgusted with them, and after working for about 6 months he was quitting and returning home.

It reminded me somewhat of my discoveries back in 1987 about how the field of archaeology worked, which also left me disillusioned and disgusted. I had thought I had found the one line of work that couldn’t be adulterated with greed, ego and corruption. I’d already seen how yellow and controlled journalism was, and how the field of education was manipulated. But was I ever wrong with archaeology! What I learned is that when funding is limited, even archaeologists will go to any means to get them, including denigrating, discrediting and trying to destroy other leading archaeologists who are vying for the same funding.

Peter, Myself and Aidan

The bus pulled away from the gas station in Abadiania after I deboarded, and I waved goodbye to Oliver. I had no idea where I was in the town. While glancing at a map in my guidebook I saw two men striding along near the highway. I called out to them and waved, and Peter and Aidan became my new best friends for the entire week of my visit at John of God’s. They walked me to the proper street and delivered me at the doorstep of my hotel. Peter was there to be healed of cancer, and Aidan was there to be with him. They were wonderful, happy and funny, with an incorrigible sense of humor. 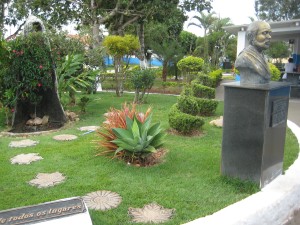 After checking into my large, clean room at the Lindo Horizonte (Beautiful Horizon), I took a stroll down the street to the Casa de Dom – John of God’s spiritual healing center. It a large block of many buildings: meditation rooms, a book and crystal store, a kitchen and seating area, therapy rooms, and outdoor seating areas overlooking the valley view. A trail leads from the far end of the property down to a waterfall lower in the canyon.

Large Crystals at the Crystal Shop

John of God is well known around the world as a healer. The healing is facilitated by spirits that work through him. As a young boy he was “told” by spirits that his life would be of service to others by giving them healings, and he has kept to that for many decades. He’s a busy person – he also owns a cattle ranch. He has travelled the world facilitating healings for those who come to him. One of the rooms at the Casa holds dozens of pairs of wheelchairs, crutches, canes, and other apparatus left behind by people who have been healed and no longer need them. I had heard about John of God several years ago, and wanted to witness a healing, and experience the Casa in person.

The place was quiet with very few people around, as it was early in the week and John of God is there only on Wednesday, Thursday and Friday. I took two back-to-back sessions of Crystal Bed Therapy for a total of 40 minutes. Lying on the massage-like table and covered with a light cotton sheet, the soft ethereal music relaxed me into an almost dreamlike state. Above my body running from my head to my hips, a row of crystals cast their chakra-colored lights onto the corresponding chakras of my body. While drifting into realms of deeper relaxation, I noticed some vibrational effects or energy traversing up and down my abdomen. When the session was over, I felt exceptionally calm, peaceful and at one with the world.

Long Distance Views from nearby the Casa

Walking back to Lindo Horizonte, the incredible beauty of the surrounding countryside came alive. There were views in all directions of green hills and valleys, and wide expansive skies of blue, with a peach-colored sunset unfolding. Flowering trees and fragrant bushes lined the streets, and a deep sense of peace and beauty permeated the entire landscape. Between the relaxation, the natural beauty and the heavenly scents, I slept like a baby that night in the best room I’d stayed in during my entire trip in Brazil. 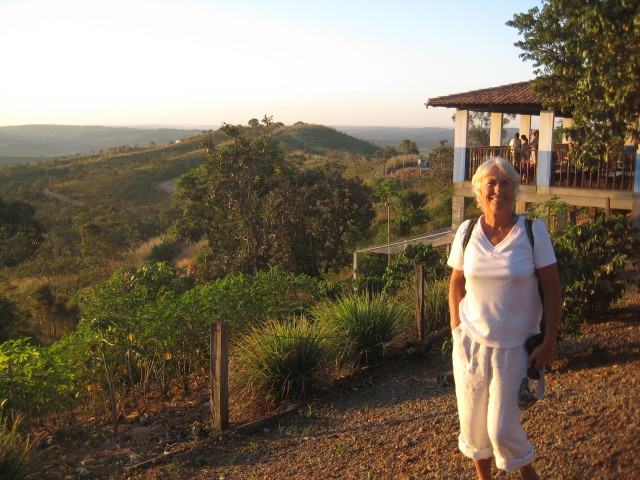 Evening Sky at the Casa

On Sabbatical to live out some Bucket List dreams. Life just keeps zooming along, and friends keep passing away. Time to live never seems enough, as the daily duties always seem to keep calling. Now I'm changing that. Gonna see the world. Come along for the ride - you're invited :)
View all posts by sayslife →
This entry was posted in Brazil. Bookmark the permalink.

3 Responses to John of God’s in Abadiania