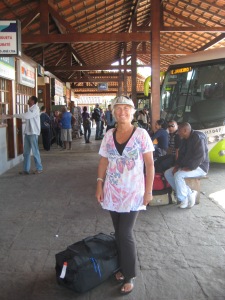 Waiting for the Bus in Paraty

May 24th, 2011 – Took a last walk through parts of Paraty I’d not seen before. There was a lot of construction going on in the building of a stone path out to the jetty. It will be an attractive addition to the town when it is done.

Back at the Hostel I savored my last Brazilian breakfast and coffee – how I will miss the coffee! There is nothing like it in the U.S.! Paid my Hostel bill and headed to the bus station, where I asked a young man to take my picture.

The bus was very comfortable – nicely padded seats and leg cushions! The route runs along the coast and turns inland at Ubatuba to climb over the mountain range and drop back down onto an interior freeway system. The coastline was stunning and lush with eucalyptus forests, pines, bamboo, banana trees, and large flowering plants that were almost trees themselves!

At Sao Jose dos Campos I exchanged buses, and caught one at 3:30 p.m. going directly to the Guarulos International Airport. It arrived at the bus stop right on schedule and had only 10 people on it! The ride to the airport was calm and beautiful in the late afternoon sun on the fast, lightly trafficked toll highway.  This was decidedly the best way to have gotten to the Airport – the other idea of going into Sao Paulo itself and catching a subway from there to the Airport would have been much more difficult – it was a suggestion that had been made to me by one fellow I had asked a few days back.

Wandering through the Airport I spied a great little Japanese restaurant tucked back away from the heavily walked areas. I ordered the combination plate – 17 pieces of fresh salmon, tuna, octopus and rolls – Yum! Plus a beer! This was the capper to my last travel day in Brazil, and a preparation meal for the long flights ahead.

My flight departed Sao Paulo on time. It was an American Airlines Airbus, and served a good dinner and an alright breakfast. I might have gotten 3 hours of sleep. When we landed in Dallas, the weather was gorgeous. It was astonishing to learn that there had just been a series of three tornados that had ripped through the city during the time I was flying from Sao Paulo. There had been golf-ball sized hail, extremely high winds, over 100 flights had been cancelled, and over 1000 people had slept overnight in the Airport on cots! What a disaster!

My on-going flight had been cancelled, of course, so I spent the entire day in the Airport watching CNN report on the tornados that had ripped through Kansas, Oklahoma and Missouri. Unbelievable destruction and loss of life.

The shuttle service that was to pick me up in Los Angeles and deliver me to Palm Springs, accepted my cancellation. Amazingly, American Airlines was able to re-route me directly into Palm Springs on an evening flight. During my day at Dallas/Ft. Worth Airport, I heard numerous stories regarding the flight delays the hurricanes had caused. One woman told me that some folks she knows had been waiting since Monday to catch a flight, as there were storms here on Monday, too, that caused canceled flights. That’s 3 days living at an Airport! I overheard another woman say that there were over 85 people on stand-by waiting to get on one flight! What a mess! But, to the credit of all the folks everywhere, all was calm and under control. There was a sense of peace in the Airport, and I took it with me on my flight back to Palm Springs.

The travels in Brazil were a big eye-opener for me. Learning the history was a revelation – it helped me understand the larger picture of how the current world became developed. Would I go back to Brazil? In a heartbeat! And next time, I’d definitely spend more time in Paraty!

My Last Meal in Brazil With My Journal

On Sabbatical to live out some Bucket List dreams. Life just keeps zooming along, and friends keep passing away. Time to live never seems enough, as the daily duties always seem to keep calling. Now I'm changing that. Gonna see the world. Come along for the ride - you're invited :)
View all posts by sayslife →
This entry was posted in Brazil. Bookmark the permalink.